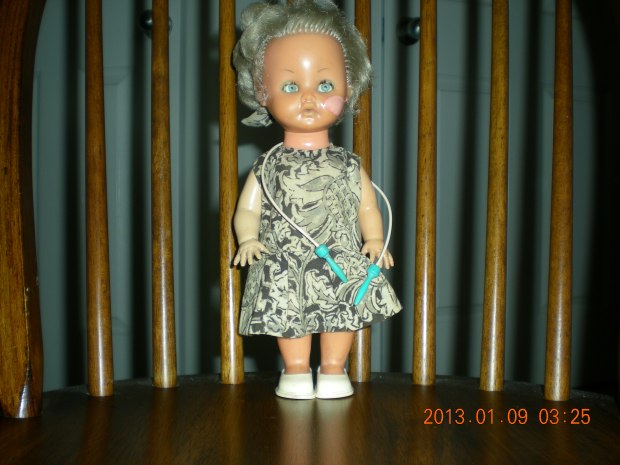 I dreamt about Gita Paapa the other night.  Nightmared about her, actually. There had been an attack and a ransack, and when I found her, she lay there behind the glass pane of the showcase, her little blond head fallen off, her eyes  which are a  cat-like green, shut firmly, and her pink-orange torso with her left arm torn asunder.

The Viking, and Ms Ting Tong, who loves to bob up and down to a music of her own,  the Pink Elephant made of soap who’s  lavender scent  had long faded away, the  little marble Taj Mahal, all lay in ruins about the dismembered Gita Paapa.

I woke up in a cold sweat, and realized with a “whew!” that I had been dreaming, and it was all I could  do to  go back to sleep and wait until a couple of hours later to rummage  about in the  Samsonite strolley to recover Gita Paapa and find her lying there  in one piece ,  still wearing her printed frock,  white shoes, and the blue&white skipping rope around her shoulder.

She opened her green eyes wide  the moment I  stood her on her feet, and  looked at me, saying nothing.  I stole a  sideways glance at her, checking for an accusing look  in her eyes. Not that I wasn’t already on a guilt trip as I  ran over the recent past and couldn’t remember when I last talked to her, or spent an afternoon.

The smile never left  the old dear’s face, and but for a streak of  green felt pen (thanks to little Chichu’s ministrations) on her left cheek, that I mean to take care of  with a touch of  nail polish, she remains as non-judgmental, uncritical and ready to shower me with unconditional love  as ever.

I decided she could use a bath, and she acquiesced silently,  plainly relieved to be released from  her prison where she  had lain, forgotten.That’s not fair . Nobody forgot her. Haven’t I always remembered to bring her along wherever I moved?  Chennai, Delhi, and now here, in the US of A?  And she has been nestling cozily in silken luxury among the best collection of Kanjeevarams that could possibly be found this side of the Atlantic?

I scrubbed her down, having decided to skip shampooing her hair as it might be too soon after her  regaining her freedom, I remembered the first time she’d been given a bath. And the storm in the teacup that it  had stirred up.
I was a toddler when  Gita Paapa arrived ,  a present from Cousin Bharathi who lives in Sweden.  She  was dressed in a white frock with blue and green floral prints, a pair of bloomers in the same fabric, a  bonnet, also of the same fabric. And the white shoes.

For the first couple of years, Gita Paapa ( no one remembers how she got the name, but everyone agrees  it was I who named her)   lived  on the top shelf of the showcase, and rarely came out to play.  She was the “other baby” in the house,  not to be handled roughly.

On one of those rare occasions that she left her high perch ( like Rapunzel, only with very short hair) ,  I discovered that she was a shut-eye, and her eyelids closed very delicately when she lay down. I was also fascinated by her green eyes.  Cousin Anu, who is two years older than me was visiting, and so was Gita Paapa. Anu suggested a bath for her, and off we went to the garden where plenty of water and a stone tank  was tempting enough for us to jump in  for a paddle too.

Our plans were nipped in the bud, by Father, who came to check on us, and , quickly rescued Gita Paapa, her clothes and the little skipping rope and blue beach bucket that had come from Sweden when Cousin Bharathi visited again. She went back to her tower.

I now see this deprivation has not scarred me at all,  though I sometimes wonder  why I entirely missed an opportunity to be jealous of Gita Paapa.  I mean , it’s natural for a kid to resent the presence of another in the house that claims even a tiny bit the attention that  she’s  entitled to. Especially if the said another  is plainly being protected from said kid’s  well-meant intentions of bathing her and feeding her.  Heck ,   Mother even  sewed a whole new outfit for her, with fabric left over from a new dress she made for me, after nothing could be done to save her blue-green floral print dress, cap and bloomer, many many years later.

When I way past the age of playing with Gita Paapa, although it never struck me then, I just liked the idea of her being there, belonging to me, and the story of her bathing adventure being narrated ad nauseum by the parents, who, to be fair, have  had the grace to look sheepish about this over-protectiveness. Gita Paapa, it so happens, could be bathed, her  hair washed and shampooed any number of times, and she’d  be as squeaky clean, pink-orange as she’s always been.

I recently discovered I can be quite  as silly over her as the parents were. Little Chichu who became the darling of second floor and delighted everyone by toddling ,  walking,  and went from talking gibberish to   speaking complete Tamil sentences in a week , or so it seems, took quite a shine to Gita Paapa. Chichu and I fell into the habit of  playing with her every day. He’d come, and squeak delightedly, pointing at her, and Gita Paapa would be fetched down from her perch on the dressing table, and so would the jar of Johnson’s baby lotion, which we proceeded to rub on her face, and then he would stand before the mirror, hugging her, and admire his handiwork. On one of these little sessions,  she acquired the green sketch-pen marks on her left cheek.

She was, luckily spared the fate of  his toys, Pooh, Teddy, Kangaroo and Singham, who for a while could be found on the ground , as Chichu had started a phase of flinging  them down over the parapet, and someone coming to second floor was always bring a stuffed toy along with them to be returned safely to Chichu’s mother.

When Chichu’s idol, KP returned from his summer in Qatar,  Chichu became quite hyper, and it all happened in A-5. Part of the raucous welcome involved flinging Gita Paapa in the air, and  I grew quite alarmed when I saw her flying across the living roon, into the potato bin in the kitchen. Before I could stop myself, I was screaming too.

“Don’t you two throw her like that.  She’s got feelings  too!” I  shouted, and the two stared at me, quite stunned to see  the normally mild,  J Aunty acting so weird . They  quietly slunk out, and  I retrieved Gita Paapa from the potato bin, and  smoothed down her dress, and made sure she was alright, and  returned her to the dressing table.

I  think Chichu lost interest in her on that day, and  I’m glad. Notice the patch of nail polish on her left cheek, and notice the rest of her, and tell me  I’m  being an ass over her.

Oh! I have to share this:  Gita Paapa’s  is a real  person, quite the girl who can fix her gimlet eye on you and  make you feel smaller than her. She stood on the bathroom counter for about three days, wrapped in a paper towel after her bath, when,  the H  asked, “how long is she going to be there?”

I bristled, quite offended on her behalf, and countered, “why?”

“Oh, nothing. Nothing at all…..it’s just that she stands there, looking at me, and I’m not used to  being watched while I shower.” he said.