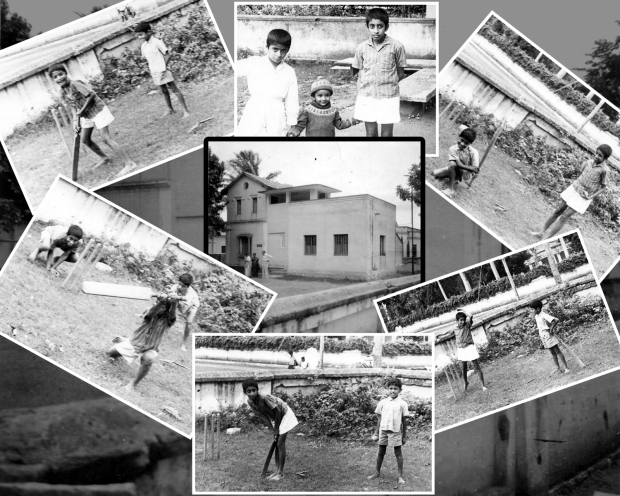 The picture of our house , in the center. The wall seen here is along Ratna Vilas Road. In the cricket pictures, in the background is  Anand Bhavan if I remember right,  where  Krest Park Apartments stands now

Ratna Vilas Road
This is a picture of our house, Mahadev Vilas, which was at the corner of Ratna Vilas Road and Kanakapura Road. In present day terms, it is diagonally opposite to Krest Park Apts. My grandfather M Ramabrahma bought and moved into that house in 1944 after retiring in Ahmedabad as an education officer in the Bombay Presidency .
I asked my father, Sheshagiri, who turned 93 this March 12, about Ratna Vilas Road and he of prodigious memory , told me the name comes from a house on the road, where a lady was running an “abhayashram” or a shelter for girls and young women who were victims of exploitation. Sometimes girls who had gone “wayward” and had been abandoned for their sins too found their way there.
My father who was 21 years old at the time, and studying to be a dairy officer at the National Dairy Research Institute says the house, a smallish building with gabled front, a style that was popular at the time, had a small compound with several trees. He remembers an almond tree or two, and also that it was a bleak, depressing place.
Ratna Vilas Abhyashrama ( not sure about the exact name) was run by a trust, with an endowment left by donor whose name is not known. The girls were given training in sewing, tailoring, and the like.
Not many people wandered into that neck of the woods, so to speak, and it was still developing as a residential area in the forties. It was such a gloomy place, that children didn’t need to be told to avoid going near it. Appa said he and friends rarely wandered in that direction,  unless they  were headed for Nagasandra Circle, or Gandhi Bazar or MNK Park, which they could reach through other roads.
Appa says after a few years, the home wound up, probably ran out of funds, and no one was willing to invest in it. It must’ve been sold, demolished and a new house built , and probably in going by current trend, that too has been pulled down to make way for an apartment block.
That, at least has been the fate of Mahadev Vilas, which had a vast compound, with the house in the middle, and originally had the outhouse on its side facing Kanakapura Road. (This is the road the leads off the South End Road somewhere near what was once Shanti Theatre, and goes on to Armugam Circle, and straight on by MNKrishna Rao Park, past the charming Renuka Devi temple). The outhouse was sold to K.S Ramaswamy, who was Editorial Representative of The Hindu, and named their house Sita Bhavan .and our two families have been friends ( and family by marriage, and sometimes purely on an honorary basis cousins, currently in third generation)This bonding was made all the more easier by the little wicket gate in the compound wall by the big champak tree, between the homes, which saw a great deal of traffic -kids, parents, and the grandparents, playing, knitting, and talking.  As  can be seen from the photographs,  the compound was large enough for a game of cricket to be played. And it was!

This is the house we lived in when I was born, and in the pictures here are my brothers and their cousins and friends playing cricket. In the background can be seen Anand Bhavan , with a bandstand, which has made way to Krest Park Apartments.
Another nugget from Appa illustrates the charming, simple lives that was lived in those days, and indeed into the sixties when I was born. With no TV, or Internet, and telephone being a luxury, people were always visiting each other, exchanges news of births, marriages and deaths, and many things in-between. Even the installation of traffic lights at MG road was big news!
So when the R. B Muthu , wife of Capt. R.B Subramanyam, a doctor who had served in the WW-1 and had settled in Bangalore on retirement, came to Ratna Vilas Road all the way from the Cantonment where they lived, my grandmother, Venkamma, ( Subramanyams were friends of our grand-uncle M. Subramanyam who was a major, and a doctor who had served as health officer of Solapur and who lived on Patalamma Gudi Road) welcomed her, and enquired as to the purpose of her visit to these parts.
Muthu, told here she had come to see about the Ratna Vilas abhayashram.
Which alarmed Venkamma a great deal, who exclaimed, ” Ayyo why do you need become a member of such a place,!”
Muthu explained she was a member of the committee that manages the home, and see to it that everything ran smoothly, much to Venkamma’s relief!
Ratna Vilas Abhayashram must been a strange presence amongst the homes of mostly middle and upper class families settling down in Basavanagudi in the 1940s, and while no one doubted its usefulness , they were also wary of it, probably being aware of how the girls who ended up there came to be there.
It wound up a few years later, until today, when the question has popped up , “How did Ratna Vilas Road get its name?”
I could look to Appa, and ask him! And get an answer.
PS – I spoke to him this morning, and when I rang off, he had left Ratna Vilas Road way behind, and racing toward Model House Street, Alur Venkat Rao Road, which referred to as Albert Victor Road, and mumbling merrily about the bus service from market via Minto Hospital , Shankar Mutt Road and terminating at Old Poor House Road.
PPS: Bye I need to catch up with him