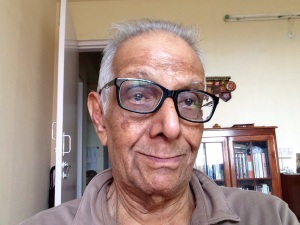 Appa turned 93 on March 12.  He and Amma  had 57 years together, from 1955  to 2012, when Amma left us. This, however is the story of another relationship, one that Appa started when he was about 14,  and endures to this day.  An intimate relationship  that never bothered Amma , though she  was often angry, and petulant and even disparaging of Appa’s choices and preferences. Sometimes, it seemed to me that Amma reserved an extra dose of meanness for him when she  laughed at his expense, and I felt torn – should I laugh with her, or  show solidarity with Appa by not smiling. Appa himself  never let it bother him, I think. Come to think of it, I don’t remember when  I last saw Appa being “officially” angry, about anything. It was the sole preserve of  impatient, intolerant Amma, whose impatience, and intolerance, I have to admit, dissipated as quickly as it erupted, and her whacky, often wicked sense of humor took over.

Then  I grew up and came to realize that they were still together,  carrying on their strange, monologous arguments conducted by Amma, interspersed with  Amma’s demands for help with the crossword, her giggles over Appa’s pooja which she found very funny- he’s saying the shlokas hesitantly, as if he doesn’t want to disturb the gods, she’d say.  I  often found myself snapping at Amma or Appa with impatience  and immediately regretting it. We would all sulk a little, laugh a little in a conciliatory manner, or  let the moment pass while I’d look rueful, and then ask for coffee, and everything became “normal” again . I also learnt that  no one can understand, or explain the how and why of a  husband-wife relationship, other than the two who are in it. Why even Valmiki wisely steered clear of this relationship, and  refrained from including “husband”  in the 16 attributes  of  the ideal man,  before he began composing the Ramayana.

I digress.  This is about Appa and his companion of  79 years. A part of our memories and thoughts of Appa. We remember how we’d wake up and go bleary eyed to the bathroom, to find three toothbrushes ready with toothpaste,  laid out on the  cement counter around the cauldron which used firewood for heating water for bath (not used, for we had graduated to the brass  “anda” fitted with an electric heating coil). For Big Brothers Subri, Bunty, and for me. We never had to squeeze paste on to our brush. In the summer holidays, when we went to Madras, or Nellore, we’d forget to pack our brushes, and Appa would forget we weren’t there, and  it would be left to Amma to scrape off the dried paste, and fling them into the waste bin.

Since I left for school early, , it was only on Sundays that I got to see Appa emerge from the bathroom, wrapped in his towel, and  the nostrils would catch a whiff of his  soap, Mysore Sandal .The scent of  comfort, and  contentment.

Which brings us to  the point of this story. We have known Mysore Sandal Soap  for as long as we have known Appa. I espy  the familiar cream box with green border, and the logo of Sharabha, the mythical  creature with the body of a lion and the head of an elephant, in an Indian store here in Herndon, and I remember Appa. Sometimes I pick up one to use, though it is not my personal choice. Indeed,  I’ve  found  it never wears out, just sitting there for weeks, hard, and relentlessly smelling of  stale sandal. If Appa didn’t ask for ia new one every few days, I’d think he ‘s been using the same cake all this time time!

So let’s begin at the beginning. , in the Old Days of Belgaum, as Appa is fond of  beginning his oft-repeated  stories , which he amazingly rememberswith great clarity,  for  Appa’s choice of soap is no mere story, but history.

In 1937, Appa (Sheshagiri, from now on) and his elder brother Pandu were sent to the hostel of Sardar High School Belgaum. Their father, M.Ramabrahma, Headmaster, had been transferred to Poona. It was also the time they  made a few choices. The one we are concerned with is-  the soap of their choice to lather up with.

For the 1930s was the decade when soaps came to be regarded as a neccesity and not a luxury. and most households had long since abandoned the desi  way of bathing with shikakai, or  besan and turmeric. Sheshagiri remembers there were some soaps claiming to have shikakai in them, but  they never did really become popular.

Soaps came to India with the British, naturally, with the Lever Brothers England introducing modern soaps , importing and marketing them here.. The first soap manufacturing company in India was set up in Meerut, by the North West Soap Company where they started marketing cold process soaps in 1897. It floundered during the World War I , but picked up again soon after the war ended.

The first indigenous soap factory was set up by Jamshedji Tata in 1918, after he purchased OK Oil Mills in Cochin, Kerala 1918, where coconut oil was crushed, and laundry soaps were made for the local market. It was renamed Tata Oil Mills and branded soaps made an appearance in the  early  1930s.

In the year 1906,  urged on by Lokmanya Tilak the Indian National Congress began the swadeshi movement, and  Ardeshir Godrej decided to launch  Indian made soap  The Governments of Mysore and Madras started independent soap factories in 1916, and in 1918, the Godrej company came out with its product, making them from vegetable oils instead of animal fat. In 1920 Godrej introduced a soap named No.2,  which was followed by No.1 in 1922.

By 1937, when  a 14-year-old and his older brother were  ready to  settle down with their personal choice of soap,  there were soaps called Turkish Bath,  and VAtni which means “of the motherland”  There was, indeed, a wide array of soaps to choose from, both  imported, and swadeshi. Lux,  and Pears, and a few other brands that came from England. , The Government Soap Factory in Bangalore, Godrej Soaps in  Bombay, BEngal Chemicals, Tata Oil Mills and the Lever Brothers  company, were already vying for the attention of Indians who bathed with passion , even obsession.

Pandu picked  Pears Soap. It was first made and sold  in 1807, by  Andrew Pears, at a factory just off Oxford Street in London, England, according to Wikipedia.Everyone knows it was the world’s first mass-marketed transparent soap with a 100 year history of its own, already. Like many other brands, mainly Lux, it came all the way from England, who still ruled over us in the 1930s. It had arrived in India in 1902.

Its not clear what clinched it for Pears Soap with Pandu. Perhaps he was fascinated by its transparent amber color, and that he could see through to the other side. Or its pungent scent, and the feel of its lather on the skin?      The extremely  racist ads Pears put out in the African continent , didn’t make their way into India,  so they are unlikely to have lured Pandu into buying Pears. There  was this cheesy one which looks like Goddess Lakshmi was endorsing Pears soap for a baby she was holding, Even Pandu would surely have found it cheesy.I do not know how long Pandu ( who is of course, our Periappa) used Pears. Perhaps Leela Periamma, his  wife and our aunt, will be able to tell us.

Sheshagiri’s choice was a historic one. A soap that had a royal birth,  from the mind of   Mysore Maharaja,  no less.  Mysore and its sandalwood are an inseparable part of  old Mysoreans’ cultural memory. And why not.

In early 1900s,  a small, exclusive stretch of forest was the solitary home of the sandalwood tree, and  this lay in the Kingdom of Mysore. Much of the sandalwood was exported to Europe, and it was only royalty, or the  rich Mysoreans who coould dream of  possessing some. World War I changed everything. Mysore was left with a glut of sandal which it could not export.  The great Sir M. Visveswaraya,  urged the Maharaja,  Nalwadi Krishnaraja Wodeyar, to set up the sandalwood oil factory, and in 1916 the Government Soap Factiry became a reality. Sosale Garalapuri Shastri, was the man who came up with the process to make soap using sandal oil. Appa mentions that one of the engineers involved with this project, later launched a clone, calling it Kailash. It was quite unsuccessful .

It is 2016 now. Mysore Sandal Soap is a hundred years old. At 93,  Appa is still using it. When he married Thulasi (our Amma,  who incidentally, was born in 1937, the year Appa picked Mysore Sandal)  in 1955, they never thought of  going out together to see if they were made for each other. They just got married, as arranged by their parents,  and that was it.  Mysore Sandal Soap, was luckier. Appa dated it for a while, used some other soaps before decided to settle down with Mysore Sandal Soap, seven years his senior. He remembers seeing the ad in Aluru Venkata Rao’s monthly  Kannada journal, Jaya Karnataka, that said Mysore Sandal Soap  was “kaasige thakka kajjaya”  ( kajjaya being a regional sweet,  fritters, made with rice flour and jaggery and deep-fried.and eaten at weddings, and on Deepavali. ) In other words,  Mysore Sandal Soap, like the kajjaya , was full paisa vasool!

Aluru  Venkata Rao, is known to us as the Father of the idea of Karnataka Ekikarana,  bringing together all Kannada-speaking areas together to form  the State of Karnataka.

Appa agrees. About  the Kaasige thakka kajjaya. He thinks the soap has remained unchanged in these eight decades of bathing together.  Perhaps it may have shrunk in size a bit,  but the non-descript shade of brown, the scent  of sandal, and it’s quiet, oval presence has not changed at all.

Appa,  of course, has aged , well, gracefully. Unlike the other guy, the famous, charming, debonair,the late Dev Anand, who was born in the same year as Appa. Whose numerous face-lifts are legendary, and who, four years ago,  looked nothing like the dashing hero he’d once been in Tere Ghar Ke Samne or Jab Pyaar Kisise Hota Hai. If he had  used Mysore Sandal,  he’d surely look nearly as good as Appa does in this  surprise selfie that he took on his birthday.

As I wind down to The End of this story,  I wonder if  the people at  Government Soap Factory, now called Karnataka Soaps & Detergents Ltd, would be interested in this Soap Appera Sandalous,  in the year  that marks Mysore Sandal’s centenary. What better endorsement than one from who has bathed away  79×26  oval bars  of Mysore sandal soap , all it’s life, barring seven years?

View all posts by Jayasri