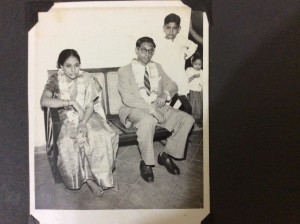 “What was  the color of Amma’s reception sari? ” I asked, wistful, and ruing the fact that I  had never thought to put the question to Amma. Now she is gone,  I am frantic in my efforts to retrieve every memory and make my story whole. The 11 black-and-white photographs of  their wedding  are peopled with more siblings and cousins than , I suspect, the Mahabharata, every face with its own history and sub-text.

Its easy to see that the sari has a solid gold zari border, and  zari checks, and her toes coyly peep out, with a coat of nail polish( or is it mehendi- gorintaaku?)  Just the minimum of jewellery, and no make up.  But the color of the sari,  I can only guess, or ask  Appa, which i just did.

I have sent him back 60 years in time, I realize, and  I jump in for a ride, reflecting for the umpteenth time, that its not fair that we don’t get to attend our parents’ wedding.

Sheshagiri(Appa) and his eldest  sister Kokila, fondly known as Kutti, and  cousin Ramachandra, were tasked with purchasing the trousseau to be given to the bride from the groom’s side.  They picked Rukmini Hall,  in Chickpet, Rukmini Hall History Here  and went shopping a few days before the July 20 wedding in 1955.  They were a party of very modest shoppers, and  no more than three or four sarees were selected, and they left with their small booty.  Our aunt Kutti being a doctor, a gynaecoligist  who later retired as Superintendent of Bowring Hospital,  was a familiar figure in these parts, and this ensured special treatment . OF course, those were days of languid leisure when life was lived in slow motion, and wedding saree-shopping was a pleasurable activity for all concerned, the shoppers and the shops.

Outside, they suddenly  found they’d stepped into a , well, a film show , only it was  very real, and all the denizens of Chickpet had gathered to gawk.  Well, who wouldn’t want to stop and  stare if  they suddenly found, in their midst,  legendary  film  star Ashok Kumar  and  the Andhra beauty, Suryakumari  equally legendary Telugu actress/singer, whose rendition of Maa Telugu Thalliki in the film Deena Bandhu went on to become the official song of Andhra Pradesh

Appa says they were shooting together for a new film. I googled, but I found nothing about a film  of them together. This scene they had stepped into was in the aftermath of  Udan Khatola, in which she acted with Dilip Kumar. She did a few more films later, and went, as part of a delegation of Indian film industry to America , where among other things, she researched Indian stories for Alfred Hitchcock.  She ultimately moved to England where she did significant work in theatre and the arts  founding India Performing Arts, a project to train performers and mount productions. Annual performances by Surya herself, her students and fellow artists followed at the Purcell Room, in the South Bank Centre, for the next 40 years. The British press paid fond tributes on her death in 2005 Obit Here

The film was probably abandoned, but if Appa says a scene was shot in front of  Rukmini Hall, it was.  Of course, there’s a way of finding out.  When the owner of Rukmini Hall learnt that stardust was at his door, he got into a fine tizzy, and  shouted for a photographer,  frantically tried to get the celebrities into his store. They might , just might have some pictures in their archives, beside the photos of Minugu Taare Kalpana shopping at their store. . A the picture which is the 1955 version of  the selfie.

Appa , Kutti and Ramachandra oozed out of the scene, unnoticed and Wooster-like and went home.

Too much history in this post. I think. First, the shop. Rukmini Hall has been around since the 1930s.  We have these wedding photos, with Thulasi (Amma) giving Suryakumari a run for her money, wearing the  sarees bought at Rukmini Hall.

I need to hotfoot it to Rukmini Hall asap, and show them these pictures, and ask if they have any of  that starry morning. 60 years ago.

My cousin Manjula, Kutti’s’ daughter,  tells me she remembers  the saree, which Amma wore at my ear-piercing ceremony when I turned one.  I was taken to the goldsmith’s on Reservoir Street, Basavanagudi, and  Manjula said I cried and drooled all over that cobalt blue saree.    Well. Babies cry. They drool. Moms just take it on the pallu.  Amma , I think  wore her wedding sarees out, used them well, at other weddings, and when they were worn thin and threadbare, gave them away. Probably exchanged them for stainless steel vessels with the steel paatrakaran  — which went into the  steel trunk , which was marked for my “dowry” .

Once again I say, what a shame we can’t attend our parents weddings.  If I had my way , I would keep the sarees, threadbare or not. But the paatrakaran was a chief source of entertainment in those days, when there was no TV, and all we had was a moody radio (Bush) that needed a lot of coaxing  before it sang or spoke.

Now even that radio is gone.  It’s criminal how we throw precious memories away. All the more reason to retrieve and cherish the ones we can. For in them,  those who have gone, will never leave.

View all posts by Jayasri Alladli